Running of the fire bulls.

Donostia-San Sebastián has its own particular running of the bulls after the fireworks. Six fire bulls leave from Miramar street in a great display of fire and gunpowder. These are fibreglass structures with rockets and flares on their backs carried by groups of young men each with their respective helpers and who run through the streets until their load fizzles out.

A rocket announces the departure of the first fire bull, sending girls, boys and young people running in all directions for around half an hour. The younger children, with their parents, run in front of the bull as it lets off sparks, coloured fireworks and bangers along the way. When the last of the six bulls arrives at the Boulevard, another rocket is fired to announce the end of the run and the bulls return to their pens until the next day.

Despite the gunpowder and fire, the only risk is that a spark may burn your shirt, since cold fireworks are used which do not burn.

Don't forget that you mustn't touch the bulls or throw yourselves at them; the bulls weigh more than 10 kilos, a very heavy and difficult weight to carry. 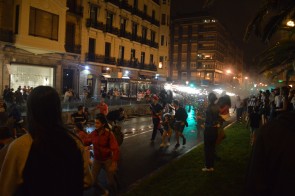 The Big Week is brought to you by: